The data in this example consists of graduate student application data provided from UCLA, with variables rank - indicates the rank of the school the applicant applied to, GRE - the GRE score of the student, GPA- the undergraduate GPA of the student. Additionally I added an unique ID (row) for each student applicant, used to help create the report. The variable 'admit' is the binary variable (0,1) that we are trying to predict.

One thing I do differently than the example given by UCLA, for demo purposes, I divide the data into training data to build the model, and validation data, or data that we use to score, the students we are trying to predict. (in practice, validation data is used to calibrate and evaluate models prior to deployment, and a final 'score' data set is used for predicting new people)

The model used in this example is a logistic regression model. After running the model,and getting the odds ratios, we get the following interesting result:

This implies that for every 1 unit increase in GPA, the odds of being admitted increase by a factor of about 2.4 (for more on interpreting logistic regression co-efficients and odds ratios see my post here.) Odds ratios can be useful for measuring the impact of various variables (which could indicate customer segments, interventions, marketing campaigns etc.) and how they relate to probabilities of any outcome of interest.

By using the R function 'predict', new data can be read in and predictions can be made using the developed model. This will give a probability of admission for each student applicant, which can then be used to create an easily interpreted actionable report that can be used directly, refined in another program like excel, delivered via web, or incorporated into an enterprise wide reporting system.  The data can be merged by ID with other data sources, and various customized reports can be created utilizing the analytics provided by the model. 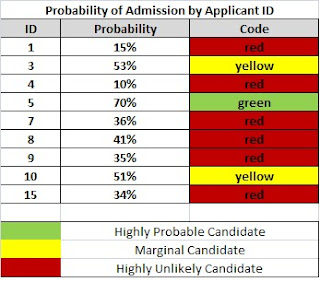 The R code used for this demonstration is below:

Created by Pretty R at inside-R.org
Posted by Matt Bogard at 1:41 AM No comments:

For a particular client I developed a predictive model that scored a set of patrons or donors at different points of time, providing the predicted probability that they would stop making contributions. At each point in time, they were more and more experienced with the service and more data about the patron was collected. As a result the model’s predictive accuracy improved with time. The client wanted to know, looking at the same cohort of customers over time, how often were the same customers predicted to stop making donations. In other words, at t=1, when the model is weakest, how many customers predicted to stop contributions were also on the ‘list’ at say t=3 when the model is much more accurate?
To do this I used the 'limma' package from the 'bioconductor' R mirror. (see reference below and R code that follows)

Before attempting to construct the Venn diagram, I had to take the scored donor data set and subset it based on all those patrons ever indicated to be 'high risk.' Then I created a data set with one row per patron and a binary indicator tracking their movement from 'novice' to 'intermediate' to 'experienced.' (t=1,2,3 respectively)

The format for the data set is similar to the layout below:

The resulting Venn Diagram is below: 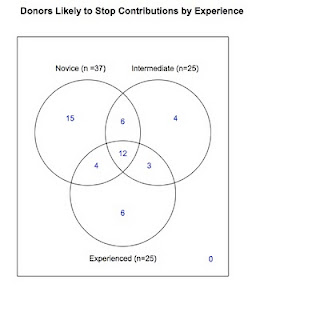 Note, there were 50 patrons in this example data set, and only 12 of those were predicted to be 'high risk' every time as they moved across each experience category or time period. 15 were high risk 'novice' patrons but never became part of the 'intermediate' or 'experienced' segments.

How can I generate a Venn diagram in R?
http://www.ats.ucla.edu/stat/r/faq/venn.htm

Created by Pretty R at inside-R.org
Posted by Matt Bogard at 9:52 PM No comments:

The following post at Constructing Difference Curves - Part 3 from economics.about.com provides a discussion on indifference curves (but actually I think they are isoquants) and how to construct them. I think I have a grasp on how to do this in R if you define the utility function as z =  √(x*y) . For the x and y data I used modified data from the article mentioned above, and then plotted some simulated data.

The data I used for x and y (which I modified-see documentation in the R-code) is listed below:

The R code below reads in the data and plots level sets or indifference curves for both the data above and the simulated data. This very basic, for full documentation ( and options for x,y limits, levels etc.) of the contour function in R see here.

Edit: for the second part of the program, if I switch the values of x and y I get indifference curves that are convex to the origin as they should be- the correction can be also represented much more compactly as:

Created by Pretty R at inside-R.org
Posted by Matt Bogard at 3:30 PM 4 comments:

Decisions about risk, leverage, and asset prices would very likely become more correlated in an environment of centrally planned interest rates than under 'normal' conditions.

Simulations using copulas can be implemented in R. I'm not an expert in this, but thanks to the reference Enjoy the Joy of Copulas: With a Package copula I have at least gained a better understanding of copulas.

A copula can be defined as a multivariate distribution with marginals that are uniform over the unit interval (0,1).  Copula functions can be used to simulate a dependence structure independently from the marginal distributions.

Based on Sklar's theorem the multivariate distribution F can be represented by copula C as follows:


F(x1…xp) = C{ F1(x1),…, Fp(xp)}
where  each Fi(xi) is a uniform marginal distribution.
Various functional forms for copula functions exist, each based on different assumptions about the dependence structure of the underlying variables. Using R, I have simulated data based on 3 different copula formulations (for 2 variable cases) and produced scatter plots for each. 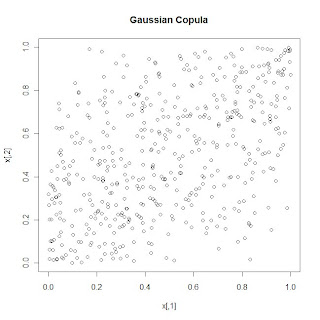 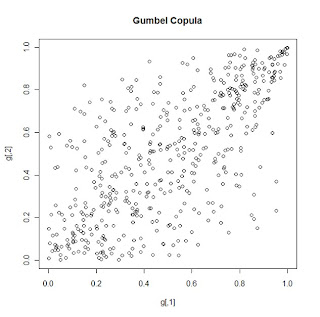 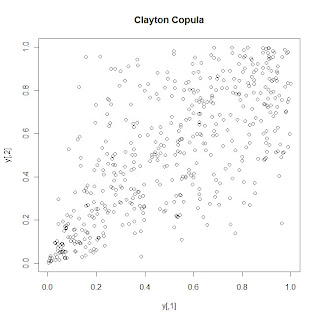 A mentioned in the Economist article at the beginning of this post, the gaussian copula was used widely before the housing crisis to simulate the dependence between housing prices in various geographic areas of the country. Looking at the plot for the gaussian copula above, it can be seen that extreme events (very high values of X1 and X2 or very low values of X1 and X2) seem very weakly correlated. The dependencies between X1 and X2 are very weak.  We can see that with the Gumbel copula, extreme events (very high values of g1 and g2) are more correlated, while with the Clayton copula, extreme events (very low y1 and y2) are more correlated.
How might this relate to the financial crisis specifically?  In The Role of Copulas in the Housing Crisis, Zimmer states:
"Due to its simplicity and familiarity, the Gaussian copula is popular in the calculation of risk in collaterized debt obligations. But the Gaussian copula imposes asymptotic independence such that extreme events appear to be unrelated. This restriction might be innocuous in normal times, but during extreme events, such as the housing crisis, the Gaussian copula might be inappropriate"
In the paper a mixture of Clayton and Gumbel copulas is investigated as an alternative to using the Gaussian copula.
The R code that I used to create the plots above, in addition to some additional plots, can be found below. I also highly recommend JD Long's blog post Stochastic Simulation with Copula Functions in R.
References:
The Role of Copulas in the Housing Crisis. The Review of Economics and Statistics. Accepted for publication. Posted Online December 8, 2010. David M. Zimmer. Western Kentucky University.
Enjoy the Joy of Copulas: With a Package copula. Journal of Statistical Software Oct 2007, vol 21 Issue 1.
R-CODE
Created by Pretty R at inside-R.org
Posted by Matt Bogard at 11:17 PM 1 comment:

The Calculation and Interpretation of Odds Ratios

Assume some event with outcomes Y or N and two groups males vs females and the following historical data:

Based on the data above, we can calculate the probabilities for Males and Females to have each outcome Y and N.

From the probabilities we can calculate the odds of event Y for each group.

From the odds we can calculate the odds ratios for event Y, which give a comparison of the relative odds for each group M and F.

Interpretation of the odds ratios above tells us that the odds of Y for females are less than the odds of males. It might be more informative if we could say how much less. To calculate this we need to go back to the raw odds calculations above.  In terms of percentages, the odds (Y) for females are [(.33-.11)/.33]*100 = -67%  or 67% less than the odds(Y)  for males.  This can be also be calculated more easily and directly from the odds ratio of F vs.M.

Odds ratios can be obtained from logistic regression by exponentiating the coefficient or beta for a given explanatory variable.  For categorical variables, the odds ratios are interpreted as above. For continuous variables, odds ratios are in terms of changes in odds as a result of a one-unit change in the variable.
Posted by Matt Bogard at 10:09 PM No comments:

Often in an analysis we are using s2 instead of σ2 (as the true population variance is often unknown). Yet we want to construct confidence intervals, or equivalently conduct hypothesis tests. The t distribution is the ratio of a normally distributed variable and chi-square distributed variable ( DeGroot, 2002).  If our data is distributed exactly normal, we can rely on using the t-table for constructing confidence intervals. These are exact results, as the t-ratio is exactly distributed t given that the underlying data is distributed exactly normal.
But what if we don’t know the distribution of the data we are working with, or don’t feel comfortable making assumptions of normality. Usually we have to estimate σ2 with s2. Of course if n is large enough, reliance on the t-table or the standard normal table will give similar results. But, Goldberger offers the following anecdote:

“ There is no good reason to rely routinely on a t-table rather than a normal table unless Y itself is normally distributed” ( Goldberger, 1991).

So, how do you justify this?   In this case there are some powerful theorems regarding asymptotic properties of sample statistics known as the Slutsky Theorems. These are outlined in Goldberger, 1991. The following sequence of steps using these theorems is based on Goldberger and my lecture notes from ECO 603 Research Methods for Economics, which was actually a mathematical statistics course taught by Dr. Christopher Bollinger at the University of Kentucky. Any errors or mistakes are completely my own.

A Guide to Econometrics, Kennedy 2003.
A Course in Econometrics, Goldberger 1991.
Economics 603 Research Methods and Procedures in Economics Course Notes. University of Kentucky. Taught by Dr. Christopher Bollinger (2002).
Posted by Matt Bogard at 11:50 AM No comments: