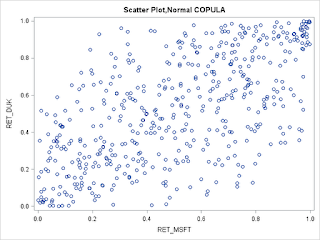 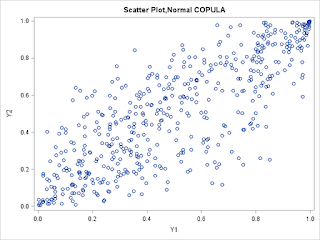 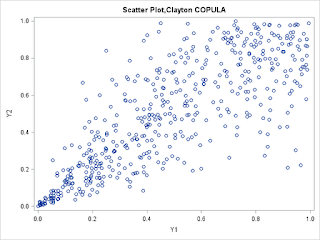 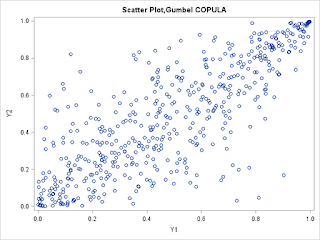 Posted by Matt Bogard at 7:58 PM No comments:

Fitting survival models utilizing time dependent covariates with the PHREG procedure in SAS involves the utilization of programming statements within the procedure that involve array processing. Based loosely on the descriptive statistics reported by Ma and Shi, I use the SAS data step loop to simulate a data set consisting of 10,000 corn hybrids including variables for genetic modification, vertical integration, and the number of close substitutes for each hybrid for each time period. This paper demonstrates the use of PROC PHREG to fit a Cox Proportional Hazards model utilizing the simulated time dependent covariates. In addition, I demonstrate the use of the %PUT statement to verify that values of the time dependent covariates are correctly utilized for each period.

Let ‘T’ be a random variable time to event. Then the distribution of ‘T’ can be described as follows:

The Hazard function is a conditional density function giving the instantaneous risk that an event will occur at time‘t’.

Then the proportional hazard for individual i relative to i’ can be written as:

As a result, we don’t have to explicitly know the functional form of the baseline hazard to calculate the proportional hazard.

The parameters for the proportional hazard model are estimated via partial likelihood estimation.


Introducing a censoring indicator ‘ci’ {=0 if censored at event time else 1} we can express the likelihood function as:

Instead of maximizing the full likelihood specified above, Cox proposed estimating the partial likelihood which does not include the baseline hazard function:

The risk set contains subjects at risk for the event at time ‘ti ‘when the event was observed for subject ‘i’. Censoring times are excluded from the likelihood.

Based on the Cox model, hazard was proportional to exp(xi'B) The ratio in the partial likelihood represents the hazard for subject ‘i’ relative to the cumulative hazard for all other subjects at risk at the time subject ‘i’ experienced the event. The estimates for β can be derived by maximizing Lp(β) , and can be interpreted as follows: