While in graduate school, the stochastic culture was dominant. However, there was some inclusiveness, take for example Kennedy's A Guide to Econometrics . Kennedy discusses the expectation maximization algorithm (also a lecture in Dr. Ng's course) and also provides a great introduction to neural networks which greatly influenced my understanding of such allegedly 'uninterpretable' algorithmic techniques.

A multicultural approach to analysis (stochastic or algorithmic) seems to be the take away message of the Breiman article and discussions that follow. In fact, this may be the best approach in the universe of all things empirical. This is certainly true in the new field of data science, and is clearly depicted in Drew Conway's  data science Venn diagram depicted below. 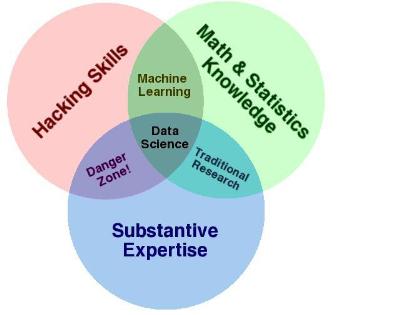 As Parzen states "I believe statistics has many cultures." He points out that many practitioners are well aware of the divides that exist between Bayesians and frequentists, algorithmic approaches aside. Even if we restrict our tool box to stochastic methods, we can often find our hands tied if we are not open minded. We can still sacrifice results over technique. And there are plenty of divisive debates.  For example, in discussing the state of modern econometrics Leamer faults econometric results that emphasize statistical significance over practicality or importance in an interesting podcast from Econ Talk here.

Brieman touches on  his idea of importance as well:

"My definition of importance is based on prediction. A variable might be considered important if deleting it seriously affects prediction accuracy"

Note, no mention of statistical significance (a child of the stochastic data modeling culture) by  Breiman

This is echoed in a paper from the Joint Statistical Meetings-Section on Statistical Education (2009) 'The Cult of Statistical Significance' by Stephen T. Ziliak and Deirdre N. McCloskey who have authored a book by the same title.  They note:

I even find a hint of this in Greene, a well known econometrics textbook author:

"It remains an interesting question for research whether fitting y well or obtaining good parameter estimates is a preferable estimation criterion. Evidently, they need not be the same thing."
p. 686 Greene,  Econometric Analysis 5th ed

It seems that cultural divides are hard to avoid. Take another example from the article below:

The above article concluded:

"Results indicate that despite the theoretical advantages offered by logistic regression and probit analysis, there is little practical difference between either of these two techniques and more traditional linear regression. "

An emphasis on robustness  or even parsimony seems to be an overarching theme in the fairly new book "Mostly Harmless Econometrics" by Joshua Angrist and Jörn-Steffen Pischke. Angrist and Pishke write about  the robustness of the LPM in their book (but also see econometrician Dave Giles  post with some challenging objections to the LPM, a followup by Angrist and Pischke, and more discussion from economist Marc Bellemare).

Their web site for the book seems to caution practitioners about being married to fancier techniques:

fancier techniques are typically unnecessary and even dangerous.

I have become more and more open minded as my experience working under both paradigms has increased. Software packages like SAS Enterprise Miner certainly accommodate open minded curiosity. Packages like R  (or even SAS IML) let the very curious get their hands even dirtier. Both have been very influential to me. When it comes to estimating the marginal effects of a treatment for a binary outcome, I usually have no issue with using an LPM over logistic regression (but I would have taken issue with it not not long ago). But when it comes to prediction I certainly won't shy away from using logistic regression or for that matter a neural net, decision tree, or a 'multicultural' ensemble of all of the above.