I’ve dedicated several posts recently to the subject of quasi-experimental designs and causal inference. I’ve tried to organize the following related links for a bigger picture.

First off, regression is often mischaracterized by a clinical view of  assumptions related to linearity. However, as Angrist and Pischke state:

Linear Regression as an Empirical Tool

In Mostly Harmless Econometrics, not only is linear regression rigorously developed and discussed, but quasi-experimental designs are given very heavy emphasis. As discussed in Cellini (2008):

… proxy variable, fixed effects, and difference in- differences approaches are becoming quite common. Indeed, these approaches have replaced basic multivariate regression as the new standard for education research in the economics literature”

The links below attempt to highlight at least in a heuristic sense, these methods and the issues they attempt to address:

Intervention Analysis with SAS and R

Granger Causality
Posted by Matt Bogard at 10:30 PM No comments:

Regression as an Empirical Tool


Linear regression is a powerful empirical tool for the social sciences.  Its robustness is often underrated, while at other times its use and interpretation is mischaracterized.  Andrew Gelman and Agrist and Pischke are two great sources for learning about regression in an applied context.

"It's all about comparisons, nothing about how a variable "responds to change." Why? Because, in its most basic form, regression tells you nothing at all about change. It's a structured way of computing average comparisons in data."

This 'computing average comparisons of data' interpretation is why regression works as sort of a matching estimator as Angrist and Pischke  argue.

“Our view is that regression can be motivated as a particular sort of weighted matching estimator, and therefore the differences between regression and matching estimates are unlikely to be of major
empirical importance” (Chapter 3 p. 70)
http://econometricsense.blogspot.com/2011/07/more-discussion-on-matching-estimators.html

In further discussion Gelman goes on to say, I think in a very appropriate interpretation:

“They're saying (Angrist and Pischke ) that regression, like matching, is a way of comparing-like-with-like in estimating a comparison. This point seems commonplace from a statistical standpoint but may be news to some economists who might think that regression relies on the linear model being true.”

This brings up a very important point, one also in-line with Angrist and Pischke regarding the use of regression as an empirical tool in the social sciences:

Regression users can seem at odds with each other at times. On one extreme they can get caught up in making very clinical assumptions  about linearity (see somewhat related discussions related to linear probability models  here and here) then on the other hand, take robustness to extremes by failing to consider at times questions of unobserved heterogeneity, endogeneity, selection bias, and identification.

Cellini(2008) discusses this issue in an analysis of the impact of financial aid on college enrollment:

“While simple ordinary least squares estimates of the impact of aid on college-going can reveal a correlation between financial aid policies and enrollment, these estimates are likely to suffer from omitted variable bias due to self-selection, potentially overestimating or underestimating the causal impact of these policies on enrollment.”

“The discussion above has outlined several methods for addressing the problem of omitted variable bias in financial aid research… proxy variable, fixed effects, and difference in- differences approaches are becoming quite common. Indeed, these approaches have replaced basic multivariate regression as the new standard for education research in the economics literature”

This is where quasi-experimental methods come in to play. 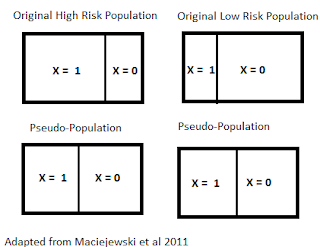 Posted by Matt Bogard at 8:30 PM No comments:

The problem of selection bias can be well characterized within the Rubin causal model or potential outcomes framework (Angrist and Pischke,2008; Rubin, 1974; Imbens and Wooldridge, 2009, Klaiber & Smith,2009). In a previous post I explained how selection bias can overpower the actual treatment effect and leave the naïve researcher to conclude that the intervention or treatment was ineffectual or lead them to under or overestimate the true treatment effects depending on the direction of the bias.

However, according to the conditional independence assumption (CIA) ( Rubin, 1973; Angrist & Pischke, 2008; Rosenbaum and Rubin, 1983;Angrist and Hahn,2004) conditional on covariate comparisons may remove selection bias, giving us the estimate of the treatment effect we need:

Millimet , D. L. & Tchernis, R.(2009). On the specification of propensity scores, with applications to the  analysis of trade policies. Journal of Business & Economic Statistics, Vol. 27, No. 3


In the article “Impact of social network structure on content propagation: A study using YouTube data” the authors investigate the relationship between socioemetric measures like degree centrality with diffusion of videos across a network.  In other words, they wanted to know if there was a causal relationship between network properties of those that share videos and the likelihood that a video would become viral.  What first interested me about this article was that it was a very good example of an application of social network analysis and viral seeding.  However, it also provides some very good examples of applications related to generalized method of moments,  instrumental variables, unobserved heterogeneity and endogeneity, and causal inference.  I previously was not aware of the GMM style of dynamic panel data models that instrument with lags, which is apparently quite popular in many econometric applications (see references below).

As the authors point out, any model that relates network properties to the outcome of video dissemination requires a careful estimation strategy if we are interested in making causal inferences. They identity several sources of endogeneity and unobserved heterogeneity.  If we are trying to infer dissemination based on one’s position in the network, we have to consider that other unobserved factors related to network position and video type could also impact dissemination.  It may be the case that all we are trying to do is predict video shares based on network position,  and perhaps that is OK as long as these correlations hold over time.

In contrast, if we want to make causal inferences, these types of endogeneity must be accounted for and also make econometric estimation difficult. In this case what we really want to estimate is the independent causal effect of network position on video shares, so we are interested only in the ‘quasi-experimental’ variation in network position.

A natural solution involves an instrumental variables approach, but the challenge of finding an ‘external’ instrument that is correlated with network and video properties of interest, but uncorrelated with unobserved effects is rather daunting. Ultimately the authors propose a generalized method of moments dynamic panel estimator using lagged variables as instruments.

Arellano, M., & Bond, S. (1991). Some tests of specification for panel data: Monte Carlo evidence and an application to employment equations. The Review of Economic Studies, 58, 277–97.