A network can be thought of in terms of graph theory as a set of vertices connected by ties. The vertices can include individuals, teams, government agencies, organizations, facebook group members, topics, patents,etc. (Coulon,2005). The ties, represented as lines connecting the vertices are referred to as ‘edges.’ Edges therefore indicate the connections between individuals, organizations etc. Vertices and connections can be represented by what’s referred to as an adjacency matrix ‘A’, where Aij = 1 if there is an edge between vertices ‘i’ and ‘j’, and Aij = 0 otherwise. Adjacency matrices are symmetric, in that Aij= Aji. For example, the following adjacency matrix corresponds to the network depicted below: 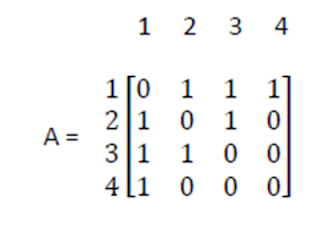 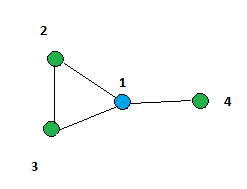 Who’s who in a network?
The role a given vertice plays in the cohesiveness of the network (its ‘importance’ or ‘centrality’ )can be assessed by a number of social network metrics.

Eigenvector Centrality is a measure that reflects the fact that not all connections are equal, and in fact, connections to people that are more influential are more important (Newman, 2012).  Mathematically, the measure of eigenvector centrality is derived from the weights that consist of the values from the leading eigenvector  (the eigenvector associated with the largest eigenvalue) of the adjacency matrix depicting the network.

So, for the network depicted above, the centrality measures for each vertex = 1,2,3,4 can be derived from the components (x1,x2,x3,x4) that comprise the eigenvector x, and what we are interested in for this metric is the leading eigenvector (associated with the largest eigenvalue of A).

Eigenvectors and eigenvalues can be derived by solving:

A Path Centric Approach to Centrality

Now let’s define the matrix power of such that B2 = B*B.

So Bk is a matrix with elements indicating the number of paths of length k between vertices i and j. The product Bk*x gives the sum of all paths of length k emanating from a given vertice. What we find is that as we consider longer and longer paths (as k becomes large) the normalized vector:

Recall the leading eigenvector of A:

So, what we have is a notion of eigenvector centrality as a metric that captures the number of paths emanating from a given vertice. A vertice that is connected to other vertices that also have lots of connections will have a greater number of k-length paths originating from it. This is information is reflected by eigenvector centrality. It turns out that the iterative  calculation of v above is essentially  the power iteration algorithm for calculating the leading eigenvector of a matrix B.

The following code from SAS IML and output provides an illustration of the preceding discussion.  In addition I have provided the function written by Rick Wicklin that implements the power iteration algorithm used to obtain the leading eigenvector and eigenvalue of a given matrix A.

The power method: compute only the largest eigenvalue of a matrix.  The Do Loop. By  Rick Wicklin.
http://blogs.sas.com/content/iml/2012/05/09/the-power-method/

Posted by Matt Bogard at 6:13 PM No comments: