From the standpoint of econometrics, the data modeling culture is described very well in this post by Tim Harford:


I even find a hint of this in Greene, a well known econometrics textbook author:


"It remains an interesting question for research whether fitting y well or obtaining good parameter estimates is a preferable estimation criterion. Evidently, they need not be the same thing."
p. 686 Greene,  Econometric Analysis 5th ed

A multicultural approach to analysis (stochastic or algorithmic) seems to be the take away message of the Breiman article and discussions that follow. The field  data science, and as clearly depicted in Drew Conway's  data science Venn diagram is multi-pillared: 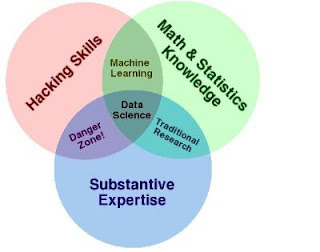 Parzen points out that many practitioners are well aware of the divides that exist between Bayesians and frequentists, algorithmic approaches aside. Even if we restrict our tool box to stochastic methods, we can often find our hands tied if we are not open minded or understand the social norms that distinguish theory from practice.  And there are plenty of divisive debates, like the use of linear probability models for one.

As Parzen states "I believe statistics has many cultures."  We will be a much more effective in our work and learning if we have this understanding, and embrace rather than fight the diversity of thought across various fields of science and each discipline's differing social norms and practices. Data science at best, is an interdisciplinary field of study and work.

This article was updated and abridged on December 2, 2014.
Posted by Matt Bogard at 2:27 AM