Ridge Regression projects Y onto principle components, or fits a linear surface over the domain of the PC's.  Ridge regression shrinks regression co-efficients  with respect to the orthonormal basis formed by the principle components. It is a shrinkage method. In producing the coefficient estimates, a 'penalized' residual sum of squares is minimized. 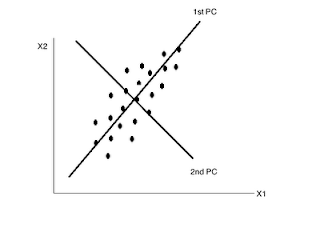