In a previous post I discussed the conclusion from Lechner’s paper 'The Estimation of Causal Effects by Difference-in-Difference Methods', that difference-in-difference models in a non-linear or GLM context failed to meet the common trend assumptions, and therefore failed to identify treatment effects from a selection on unobservables context.


In that paper I noted that Lechner points out (quite rigorously in the context of the potential outcomes framework):


I wanted to review at a high level exactly how he gets to this result. But I wanted to simplify this as much as possible and start with some basic concepts. Starting with a basic regression model, the population conditional expectation function, or conditional mean of Y given X can be written as:


and we estimate this with the regression on observed data:


Where b1 is our estimate of the population parameter of interest β1.


When it comes to experimental designs, we are interested in knowing counterfactuals, that is what value of an outcome would a treatment or program participant have in absence of treatment (the baseline potential outcome) vs. if they participated or were treated? If we specify these 'potential outcomes' as follows:


We can characterize the treatment effect as:


Difference-in-difference (DD) estimators assume that in absence of treatment the difference between control (B) and treatment (A) groups would be constant or ‘fixed’ over time. Treatment effects in DD estimators are derived by subtracting differences between pre and post values within treatment and control groups, and then taking a difference in differences between treatment and control groups. The unobservable effects that are constant or fixed over time 'difference out' allowing us to identify treatment effects controlling for these unobservable characteristics with out explicitly measuring them. This characterizes what is referred to as a 'selection on unobservables' framework.

This can also be estimated using linear regression with an interaction term:


where d indicates treatment (d=1 vs d = 0) and the estimated coefficient (b3 ) on the time by treatment interaction term gives us our estimate of treatment effects. 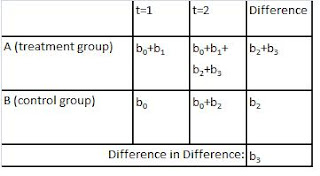 
In an attempt to present the issues with GLM DD models depicted in Lechner (2010) using the simplest notation possible (abusing notation slightly and perhaps at a cost of precision), we can depict the framework for difference-in-difference analysis using expectations:


We can represent potential outcomes in the regression framework as follows:


“difference-in-difference of potential outcomes across time if treated”


We can estimate δ with a regression on observed data of the form:


where b3 is our estimator for δ.


Common Trend Assumption:
Difference-in-difference (DD) estimators assume that in absence of treatment the difference between control (B) and treatment (A) groups would be constant or ‘fixed’ over time. This can be represented geometrically in a linear modeling context by 'parallel trends' in outcome levels between treatment and control groups in absence of a treatment: 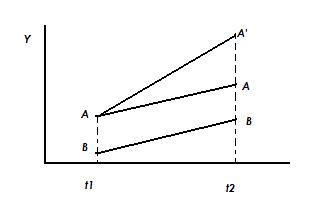 As depicted above, BB represents the trend in outcome Y for a control group. AA represents the counterfactual trend, or parallel or common trend for the treatment group that would occur in absence of treatment. The distance A'A represents a departure from the parallel trend in response to treatment, and would be our DD treatment effect or the value b3 our estimator for δ.


The common trend assumption following Lechner, can be expressed in terms of potential outcomes:


i.e. the pre and post period differences in baseline outcomes is the same (δ0) regardless if individuals are assigned to the treatment group (D=1) or control group (D=0).


In a GLM framework, with a specific link function G(.) a DD framework can be expressed in terms of potential outcomes as follows:


DID can be estimated by regression on observed outcomes:


It turns out in a GLM framework, for the common trend assumption to hold, group specific differences must be zero or γ =0. The common trend assumption relies on differencing out specific terms of the unobservable potential outcome, or the individual specific effects we are trying to control for in the selection on unobservables scenario, but in a GLM scenario we have to assume that these effects are zero or absent. In essence, the attractive feature of DD models to control for unobservable effects is not a feature of DD models in a GLM scenario.
References:
The Estimation of Causal Effects by Difference-in-Difference Methods
By Michael Lechner Foundations and Trends in Econometrics
Vol. 4, No. 3 (2010) 165–224