In a previous post a gave a general overview of QTL mapping and analysis, and gave the motivation for the use of maximum likelihood to identify the approximate location of a QTL based on RFLP (or marker) variations. Below are more details related to the statistical methods that can be used in this process.

Analysis of Variance and Marker Regression
At each marker (RFLP) loci, compare backcross phenotype distributions for groups that differ according to their marker genotypes. As depicted in Broman (2001) 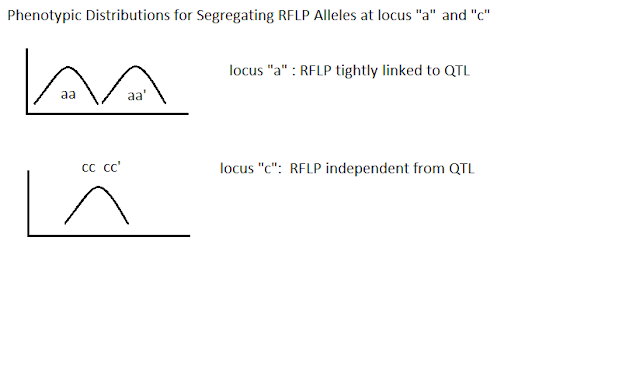 For markers a and c, we see that phenotype distributions differ for genotypes aa and aa’ but not for cc and cc’. Again this indicates that a QTL may be linked to the RFLP genotypes at locus “a” but not "c".
The differences between genotypes and the associated phenotype distributions for two marker genotypes can be assessed using the t-statistic. For >2 genotypes, analysis of variance may be used. The ANOVA approach allows a flexible experimental design, allowing for the incorporation of covariates, treatment, and environmental effects.
The model for marker regression, following the notation in Hu and Zu (2009) can be specified as follows:
yi= Xiβ + Ziγ +ϵi
such that  yi  is the phenotype of the ith individual, β is the vector of control effects, Xi is design vector,γ is a vector for QTL effects, and Z is a genotype indicator vector.
Z = H1 for A1A1 , H2 for A1A2 , H3 for A2A2  or more generally